Formation of the Club

The first meeting, attended by seven persons with two apologies, was held at Dandenong Fire Station on 8th September 1987, at which it was resolved to ".....form a Four Wheel Drive (4WD) Club for CFA Staff Members".
David Owen was elected President; Barry Lewis, Vice-President; and the Secretary/Treasurer was John Stanton.

It was agreed that a letter be sent "....to the Chairman of the CFA seeking permission to use CFA in the Title of the Club". At a subsequent meeting it was further decided to write to the CFA Board regarding the use of the CFA Emblem.

At the January 1988 Club meeting, it was noted that the CFA Board had granted permission to use both the CFA name and emblem in the Club’s logo.   The CFA Staff 4WD club was incorporated on 16th May 1988.

In 1993 the word "staff" was dropped from the Club name, as many members were not employees, but CFA volunteers. Additionally the logo was changed, away from the earlier blue-on-white CFA “shield” style, to the more recognisable red-white chequerboard pattern and ‘CFA’ title, with the words ‘4WD Club’ set prominently alongside. The certificate of incorporation was changed on 22nd June 1993 to reflect this name change.

In recent years Club membership has expanded to include, initially, members from other emergency services.  Currently the club accepts members from the general public, subject only to them accepting, and upholding, the Club's Code of Ethics.

In 2004 the CFA 4WD club logo was amended again.  This change was due to the registration of the CFA logo.  The now registered logo of CFA meant that we could not use the CFA logo incorporating the letters 4WD Club.  The CFA 4WD logo, is now made up of the CFA logo, and 4WD Club as separate items.

The first trip conducted by the new Club was a day trip to the Mt Disappointment area on 15th November 1987, and was led by John Stanton. 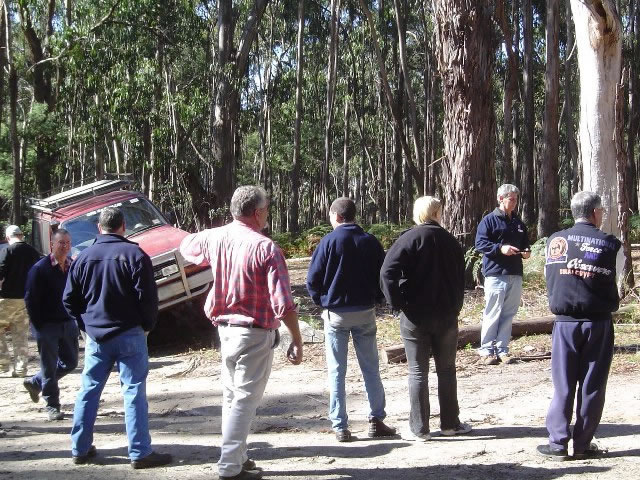 Training of members also commenced, but in those early days was very much of an ad-hoc nature.

Training is now more formalised, with the Club counting accredited instructors (either by the Victorian Association of 4WD Clubs, or the CFA) amongst it’s members, and offering fully accredited training to new members.

The first major trip conducted by the Club was a Simpson Desert crossing, in June/July 1989, led by David and Joan Owen. 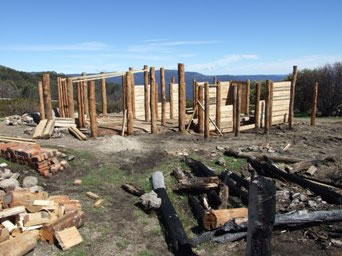 In late 1991 the Victorian Association of 4WD Clubs (the Association) advised that the Mansfield-Alpine 4WD Club were seeking assistance in the restoration of Craigs Hut (ie. a total rebuild), near Mt Stirling. A major exercise was conducted in February 1993 including CFA Club members, noting that various Club members had already dedicated ‘several’ weekends helping with the preparatory works. Today, Club members still donate many hours of work each year in maintaining the hut and surrounds.

Craigs Hut is well known for it’s role in ‘The Man From Snowy River’ films. It is a tourist icon of the High Country, and is visited by thousands of people annually, on foot, horseback, pushbike, motorbike, 4WD, and (in winter) on cross-country skis.

At the official ‘opening’ of the hut in 1993, attended by some 500 persons, the Association President was reportedly “glowing in praise for CFA 4WD Club…. commitment and effort in Craigs Hut exercise.” 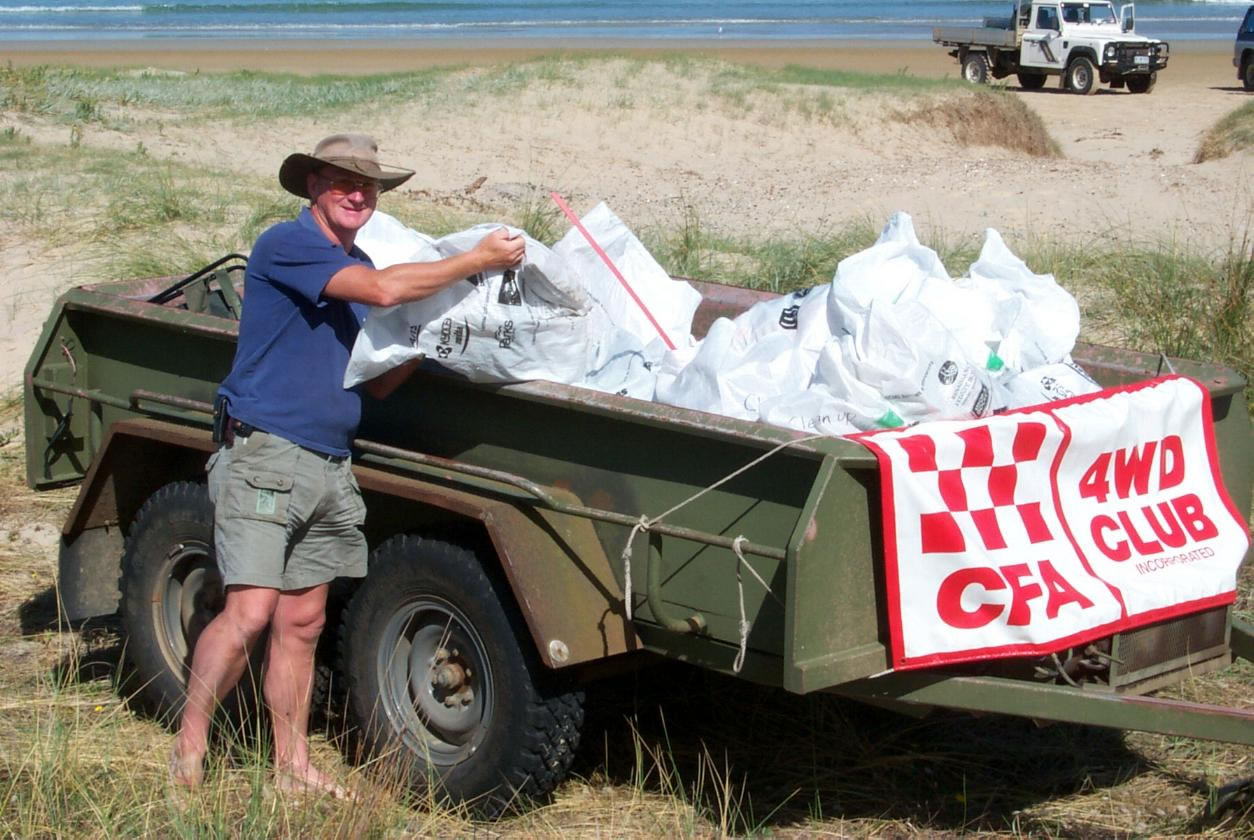 In 1992 the Club conducted a very successful ‘beach clean up’ in the Inverloch area. Since that time, the Club has conducted an annual beach clean up around the ‘5-mile creek’ area (midway between Cape Liptrap and Venus Bay) with the approval of Parks Victoria regional officers, in conjunction with the annual ‘Clean Up Australia’ national campaign.

Marking of the Geographic Centre of Simpson Desert

In 1993, Club members, led by David Owen, located the Geographic Centre of the Simpson Desert using Global Positioning System (GPS) techniques. A marker (an empty jerrycan imprinted with the club name, date, and the latitude and longitude) was mounted on two tent poles. A flap was cut into the jerrycan and a logbook stored inside. 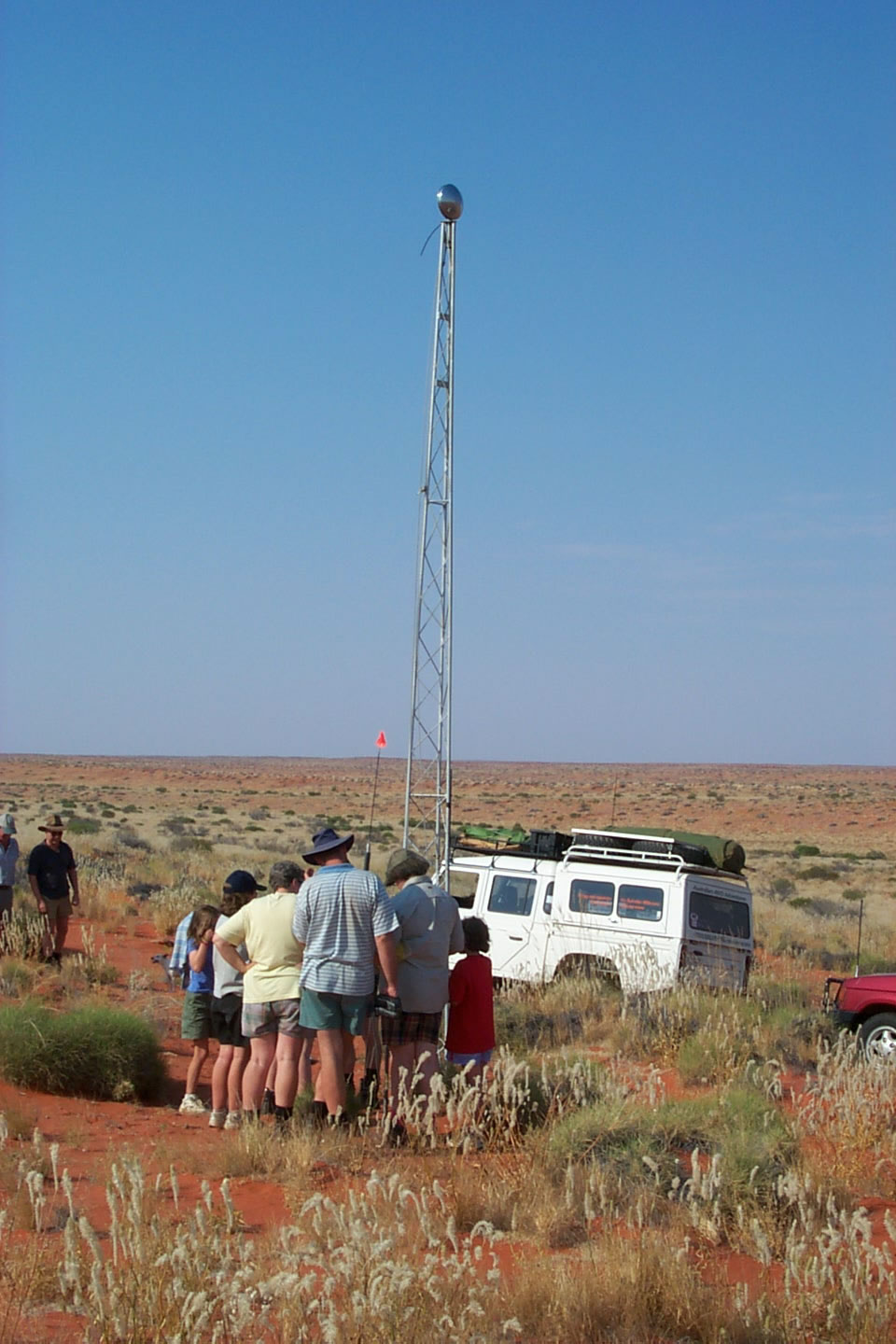 The centre of the desert is approx. 100kms north-east of the intersection of the Colson track and the French line and is rarely shown on maps. The extent of the desert and the #8216;calculated’ position of the desert centre, are however shown on the introductory map in Mark Sheppard’s book ‘The Simpson Desert – Natural History and Human Endeavour’, first published by the Royal Geographical Society of Australasia in 1992.

It is reached by an arduous trip along old, overgrown and barely discernible ‘seismic’ (or ‘shot’) oil exploration lines and by cross-country travel. This trip is only for extremely well prepared and equipped groups, with experienced 4WD drivers, and requires good navigation skills. A detour through the Geo Centre will add at least 5 days to a Simpson Desert crossing, which can usually be traversed in 3 days from Mt Dare station to Birdsville via the French and QAA lines, assuming normal conditions.]

In 1995, Club members erected a tower (alongside the original marker, which is still in good condition today) topped by a shiny metal globe.

At the Club visit (October 2000) the logbook showed that only 11 groups had visited the site. A (private) visit by Club members in 2001 reported that, unfortunately, the logbook appears to have fallen from the jerrycan and has presumably been destroyed by strong winds. A small container with business cards from visitors was still in good condition however.

Erection of the Information Shelter at Licola

In 1994 the Club erected the Information Shelter outside the Licola General Store. This Association project had been mooted for some years, but obtaining regulatory approval, and volunteer design and construction labour, had proven difficult. The Club took over the construction responsibility, pre-fabricating the structure in Melbourne and erecting it over one weekend. Parks Victoria has a display board providing information, maps, etc of the adjacent High Country. The Association, and the local community, also uses the notice boards to advise travellers of information.

In 1995 the CFA and Mansfield-Alpine 4WD Clubs formalised the dinner as a co-operative fundraising venture. The aim of the dinner was to promote the High Country, and to raise money for the ongoing maintenance of Craigs Hut. The dinners grew in popularity year by year, but after 6 years the logistics, and difficulty in attracting sponsorship, finally proved too much, notwithstanding the enthusiasm shown by the guests.

In the end, large sums were being expended in hiring equipment and specialist labour (eg. chefs, etc), leaving little residual money for the promotion and maintenance of Craigs Hut, whilst still consuming many hundreds (probably thousands) of volunteer hours from members of both Clubs in organising things, cleaning up the site, setting up, waiting on tables, cleaning up, and a million other little things to be done each year.

Reluctantly the dinners were abandoned, with the last one being held in February 2000.]

In August 2005 the club agreed to assist the VHCHA to assess the work required in maintaining some of the huts in the Victorian High Country.  The first phase of this project is to locate the huts in the "Barry Mountians" District and prepare a report on each hut.  The club will then decide if we are in a position to be able to commit to the maintenance of these huts.

Inaugural President David Owen was awarded honorary life membership in 2001 when he resigned his employment with the CFA, and moved to Coffs Harbour where he now runs his own business (including 4WD tours). He and Joan still take an interest in the Club’s activities, and son Daryl joined the Club’s committee in 2001/02.

Club members are mostly CFA personnel, either staff or volunteers, although this is not a pre-requisite for membership.

Some members are involved in the 4WD business (full-time or part-time), either in the provision of training, trip leadership (eg. tag-along type tours), or vehicle preparation and equipment sales. There is no ‘hard-selling’ of their services within the Club however. In some cases, members may not even be aware of the 4WD-business involvement of other members.

The Club is not a gung-ho ‘get-there-or-bust’ organisation, although some skilful use of vehicles up to their design limits is often necessary in difficult terrain.

Q2. Is my vehicle capable of getting there, without unnecessary risk?

Q3. Am I capable of driving the vehicle there safely?

Q5. Is there another way to get there?]

Members operate a range of vehicle makes and types. They include Toyota (Landcruiser, Troopcarrier, Hilux, and at one time a RAV4), Nissan Patrol, Landrover (Discovery, Defender and a military style 101” forward-control type), and others.

Members have a wide range of experience and skill in fitting-out vehicles, and preparing for remote-area trips, and are happy to share their knowledge.

The Club is a member of the Victorian Association of 4WD Clubs, and is thus also affiliated with the National body, and the Tread Lightly campaign. The Club instituted it’s own Code of Ethics at a time when even the State Association had not yet done so (the Association’s Code turned out to be very similar to that of the Club, even though they were prepared independently).

If you are interested in family-oriented four wheel driving, in a smaller club (where you can get to know everyone), and are prepared to follow a sensible and responsible Code of Ethics, then you should consider joining the CFA 4WD Club.

Compiled from minutes, newsletters and other documents by Allan Layton